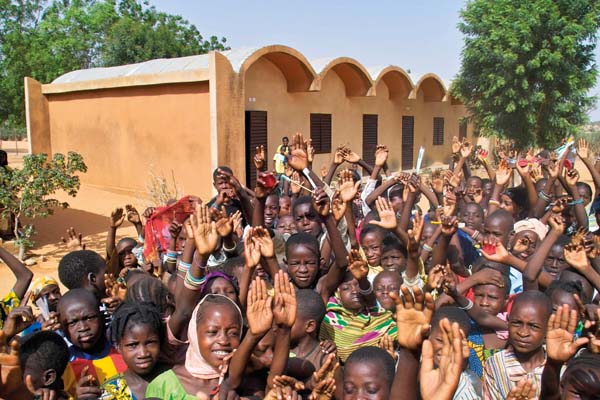 Niger is a landlocked sub-Saharan country with a population of approximately 17 million. It is one of the poorest countries in the world. With limited natural resources and human capital, Niger faces enormous challenges and is subject to severe pressures.

This vast, arid country has the world’s highest population growth (3.9% annually). In 2016 it ranked 187th out of 188 in the HDI of the UNDP, with a GDP per inhabitant of USD 889 (in purchasing power parity), i.e. one of the lowest in Africa. Poverty is exacerbated by political instability, extreme vulnerability to external shocks, and inequalities that penalise girls, women and children disproportionately. With almost half of the population aged under 15 years, the future socio-economic stakes are high against a background of noticeable climate change for several decades.

Two-thirds of Niger’s land area is desert. Only a strip in the south of the country is green. Access to water is a problem for a large part of the population, although water towers are gradually being built in the towns. The desert is advancing at a rate of 200,000 hectares every year. Government reforestation programmes are hampered by frequent droughts together with a rising demand for wood and agricultural land. More than a third of the forest area has been lost since 1990, and it now covers only 1 % of the country.

Niger, which became independent from France in 1960, had a one-party system with a military regime until 1991, when General Ali Saïbou was forced by his people to allow multi-party elections, which resulted in a democratic government in 1993. Political struggles led to a cessation in the government and resulted in a coup in 1996 by Colonel Ibrahim Baré. In 1999, Baré was killed in a second coup against the military officers, who restored democracy and held elections, from which Mamadou Tandja emerged victorious.

Tandja was re-elected in 2004 and in 2009, leading a constitutional amendment that allowed him to extend his term as president. A military coup expelled Tandja in February 2010. The presidential elections held at the beginning of the year restored civilian rule on 12 March 2011 with the election of Mahamadou Issoufou in the second round.

Multiple economic, social, environmental and security problems weigh heavily on the MDGs, the main goals being to improve the poor development of human capital; environmental degradation and climate change; high population growth; low and erratic economic growth; food and nutritional insecurity; overall insecurity in the country; and the impact of security problems on neighbouring countries (Mali and Nigeria), especially in the form of migration flows.

Niger’s economy is centred on food crops, livestock, and some of the world’s largest uranium deposits. Only 18% of the population lives in cities and the majority (one million) live in the capital, Niamey. Niger shares a common currency, the CFA franc, and a common central bank, the Central Bank of West African States, with seven other members of the West African Monetary Union.

Niger’s social indicators have risen sharply for 20 years, and this trend is set to continue. The Gross Enrolment Ratio for primary education rose from approximately 29% in the early 1990s to 71% in 2016, and the number of girls attending primary school in relation to boys also increased over the same period, from 25% to 40%. The child mortality rate for under fives fell between 1990 and 2010, from 320 to 95.5 per 1,000. The prevalence of HIV/AIDS in adults remains at 0.5% - one of the lowest rates in sub-Saharan Africa.

This turnaround in economic growth and social indicators is reflected in the steady improvement in the country’s human development index, which rose from 0.229 in 2000 to 0.353 in 2015 – although these results are still one of the lowest worldwide.

The insecurity in the north and south-east of the country is a risk factor for the region’s economic and social development. It contributes to exposing the population to recurrent humanitarian crises, and accentuates the deterioration of socio-economic indicators (health, education, jobs, income) in the regions.

The actions developed by LuxDev form part of the third Niger-Luxembourg ICP. The main areas and fields of activity in Niger are as follows:

Building national capacities by strengthening and enhancing existing institutions and mechanisms has formed part of the project and programme strategy over the past two decades. The aim has been to improve living conditions for the most vulnerable populations and to enhance sustainable development.

In Niger, the Luxembourg development cooperation initiatives form part of the Economic and Social Development Plan, which covers 2017-2021.

Evolution of activities in Niger (in thousand EUR)

Distribution of the 2019 disbursements by sector

All projects in Niger